Just started reading The Ranger's Apprentice, by John Flanagan . The first chapters of Book 1 - The Ruins of Gorlan - show a significant amount of similarity to Raymond Feist's Magician. Having said this, I don't think it detracts from the book at all, because as we know, Magician was a masterpiece, so who wouldn't want to read something similar? Whilst only a short way into the book, I am really enjoying it and very much looking forward to reading the entire series. My son read these in his younger years and still gets them out to re-read them. That's a good sign! Gotta go... Book 1 is calling me!
Post a comment
Read more 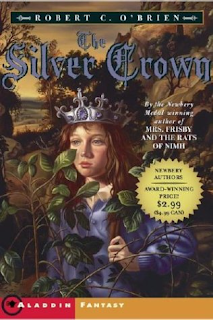 The Silver Crown by Robert C. O’Brien. I read this in primary school and absolutely loved it. Ellen discovers a mysterious silver crown in her bedroom on her tenth birthday. By pure luck she is not in her house when a vandal attacks the building with a Molotov cocktail and the house burns down, but while she is out at the park and she witnesses a murder, which at the time appears to be unrelated. With the terrible loss of her family, and feeling she has nowhere to turn, she decides to hitchhike to her Aunt Sarah in Kentucky. On the way, she escapes from a disturbing kidnapper, is chased though the woods, and eventually finds an ally in 8-year-old Otto, a strange orphan boy living with an old lady he wrongly believes to be his mother. With Otto, she treks through the mountains, all the while being hunted by sinister men. After many mishaps, Ellen discovers a disquieting black castle in the forest where she encounters a medieval device called “the Hieronymus Machine” which is mind-co
Post a comment
Read more
More posts